Left is a cliff, ancient Chinese lived in caves in the bottom of cliff. 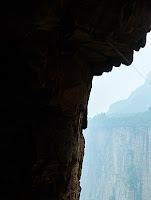 From their view, they see cliff all the time.

The right top is mouth (the triangle), the low part is cloud.Why is there a mouth on top? No explanation is found. I think that the ancient Chinese believed that there is a King in the sky who is in charge of weather.  When he spits clouds from his mouth, it is a cloudy day. 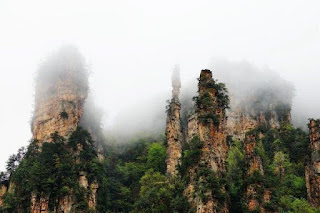 very similar to its bronze script.

which is similar to the old scripts but a little bit more complex.

The traditional song typeface of the character Yin is

which is very similar to the clerical script.

The simplified song typeface of the character is
阴

which is changed a lot, the right part is 月（Moon), totally different from that on old scripts.

Is this change rational? Some degree. The original scripts emphasize the Shade in the day time, the sun is blocked by clouds. The simplified song typeface uses Moon to replace the right part, which means "night with moon", different from shade in day time. But it has no sun too. Some degree rational. 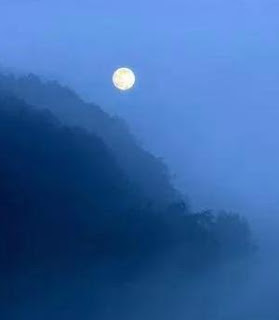 Its Pinyin is Yin1.

Some of you may have heard Yin-Yang, a famous Chinese philosophy. Yin-Yang in Chinese is 阴阳, the first character is 阴. I will discuss Yang - 阳 in next post. We will see what they Yin-Yang really mean in the view of original pictography.