The shell bone script for character Yang is

The left is the cliff, we mentioned in Post 252. 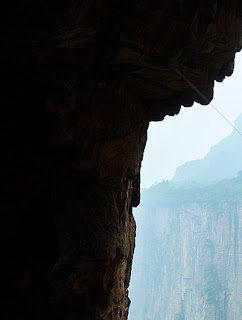 The bottom part is the sunshine by 《象形字典》(Dictionary of Pictography). 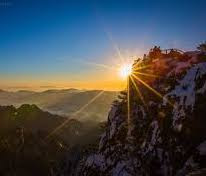 The bronze script for the character is

The right bottom has three slashes on the left of the curve, which is the sweat drops from a person because the hot sun.

similar to the bronze script. The right is character Easy (Post 548).

the left part is changed to "Ear radical" with the meaning of cliff as I mentioned in Post 253, the right part is similar to that of old scripts.

The traditional song typeface of the character is

The simplified song typeface of the character is
阳

The sunshine on the right bottom disappeared, which is OK because the Sun is still there.

Its Pinyin is Yang2.

Basically, 日 is sun, 阳 is the sunshine on the cliff in original meaning. 阳 means sun too in most of time too. The difference between the two is very subtle nowadays.

阳 is not only Sunny, but is part of famous Chinese philosophy 阴阳 (Yin-Yang). I discussed 阴（Yin) in Post 253.

阴阳（Yin-Yang) is so important and so rich in content that I will discuss it in an independent post under my another blog "Chinese Calligraphy History" (https://leweishang.blogspot.com/2016/02/why-chinese-say-buy-east-west-instead.html)