The shell bone script for character Smooth is 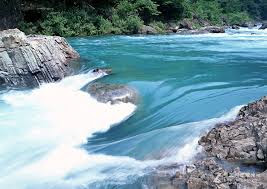 A person is watch the river flow, which means Smooth, not only the river flow is smooth, but the person's mood is relaxed, and pleasure.

The big seal script for Smooth is

The left is River, the right is Meet (See).

The small seal script for Smooth is

the left is River, the right is Page (See Post 257). The original meaning of Page is impression in mind (feeling) through watching.

The clerical script for Smooth is

The left is River, the right is Page.

The Pinyin for 顺 is Shun4.

The shell bone script of character Each is

The bottom 口 that means a home. A foot toward to home - a person walks to a home, which the person is a correspondent who sends notice to every family.

similar to the old scripts.

The small script of the character is

The top changes big, but still some similarity to the old scripts.

The top becomes symmetrical, not like a foot. But it still has some similarity to old script.

Its Pinyin is Ge4.

The bronze script for Worship is

The left one has a Hand (See Post 55) on the right, and Wheat (See Post 146) on the left, which offers a sacrifice to Heaven during praying for good weather in early spring.

The middle one just exchanged the hand and wheat.

The right one, left is hand, right one is a person kneeling down.

The small seal script for Worship is

The left is Hand, the right is wheat, but is different from the character Wheat.

The clerical script for Worship is

left is hand, right is wheat, different from the character Wheat though.

Its Pinyin is Bai4.

拜 has widely used not only for Worship, but for serious visits between people normally means the visit is a formal, showing respect. 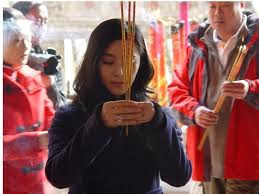 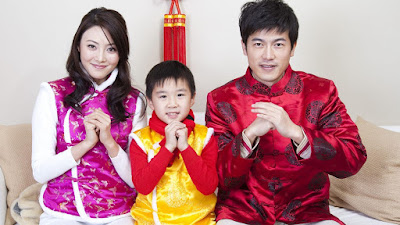 and make a bow with hands folded in front, one is fist another is open palm.
Posted by Lewei Shang at January 17, 2020 No comments:

The shell bone script for character Forever is

The two sides mean a river. 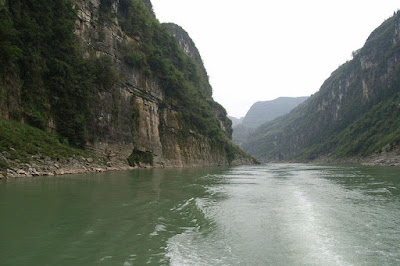 Ancient Chinese believed the river never stops flowing, and it is endless going forward which is Forever. A person in the river could mixture into river to become part of the river which is forever alive.

Chinese proverb says "与山川同在，与日月同辉“ - With mountains and rivers, with the sun and the moon, which is forever.

The bronze script for character Forever is

The middle is a person, the river flow on the sides, similar to the shell bone script.

The middle person has the flow shape, and the two sides are water flow, which is similar to small seal script Water as below

Because ancient got water from river, so they draw a river to represent Water.

The clerical script for the character Forever is

The person in the middle could no long be recognized easily.

Let's compare it with clerical script of Water

The bottom parts are identical each other.

Its Pinyin is Yong3.

The shell bone script for character of Far is

The right part is like a half intersection, which means road or street.

People carry some cloth and take on the road, which means Far. If it is not far, you don't need to bring more cloth. 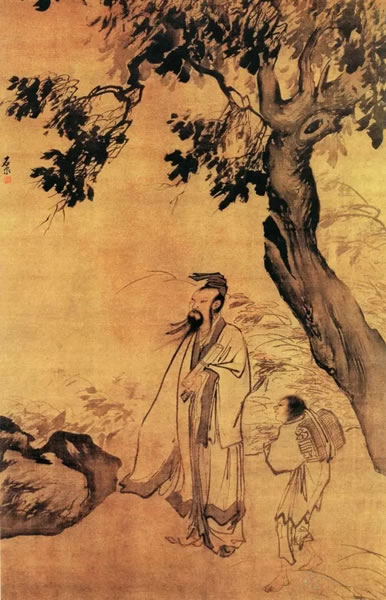 The bronze script for Far is

the left is Street/Road, the right top is Foot, the right middle is Cloth, and right bottom is another
Foot.

The small seal script for Far is

The left top is Road, left bottom is Foot. The right top is Foot, the middle and bottom is Cloth.

The clerical script for Far is

The traditional song typeface for Far is
遠

Nowadays, we go a very far place on foot, we need to bring some cloth too. 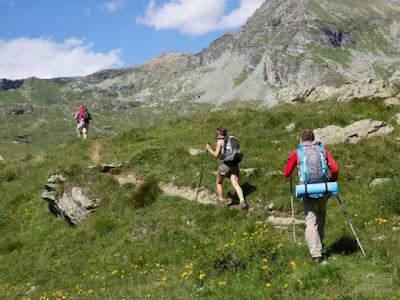 The simplified song typeface is

The shell bone script for character Page is

which is a person kneeling down with a big head and eye.

The original meaning is not Page, but mind, head, or brain. I think that it is more like mind.

only a head, no body. It is more like a physical head, no any mind activities.

on the top is the head, and middle is face (or eye some experts believe), the bottom is the body.

The small seal script for character Page is

which is a face on the top part, and two legs on the bottom half.

I have to point out that in the shell bone script time (3000+ years ago), it was Neolithic age and Bronze Age, in the north China, rock painting was popular. 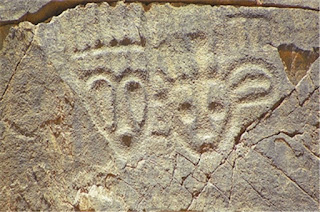 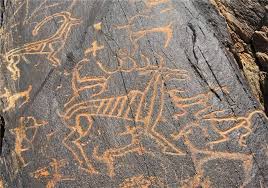 both rock paintings are from Yanshan, Inner Mongolia, China.

How could the meaning of the character have changed from mind to page? I have not found a good explanation.

Some similarity to its small seal script.

Its simplified song typeface is

Its pinyin is Ye4.

頁 or 页 means Page, has no any meaning of mind/head/brain at all, which is not common. Most characters keep the old meaning in some degree but 頁/页 is not.

So most Chinese don't know it meant Mind originally.
Posted by Lewei Shang at January 04, 2020 No comments: