The right one has Sun (日，see Post 4) on the top, and Grass (草，see Post 49) in the bottom. When the Sun rises just above the grass is Morning. 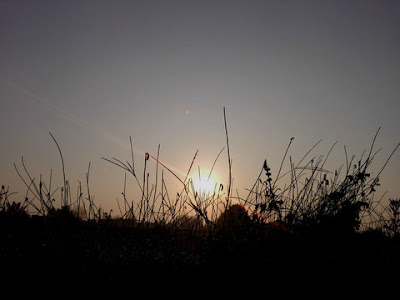 The left character has a grass on the top left just over the right one character, the middle is a moon, and the right  are two grass. In the morning, the Sun is rising when the moon may be still in the sky. The middle character has a same left part as the one left character does, and a character Evening (Moon with empty inside, see Post 52), the inside empty moon means the moon in the early moon not bright anymore.
The bronze scripts of Morning are

Similar to shell bone script, except the straight horizontal line in the bottom.

In which, the bottom is changed very big. Some people believe that the bottom is a type of grass, others think that it was written this way mistakenly.

The small seal script of Morning is

The clerical script of Morning is

Which is changed back to similar to old scripts.
The song typeface of the character is
早
Same as the clerical script.
Its Pinyin is Zao3.

早 is one of the most popular characters. It is an adjective. People greet each other in the morning:"早上好！” （Good morning!). Even just say "早！“ （Morning!), which are same as people do with English.
Posted by Lewei Shang at February 27, 2020