The shell bone script of character Square is

A person is shackled by ancient Chinese shackle, which is the original meaning. 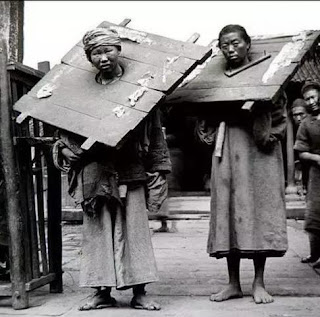 The above picture is uncomfortable, but it is better to show what the old shackles look like than text. The top is a square board.

Some similarity to shell bone script. The script looks not very well writing partially due to the poor technology of bronze casting 3000 years ago.
The big seal script of character Square is

The top is simplified to be a horizontal line, which is an indicative for the square shackle.

The original meaning of being shackled had been disappeared, probably back to 3000 years ago, people used the character as Square.

similar to the big seal script.

which is changed a lot, still some similarity to the old scripts.