The big seal script of character Stop is

In the ancient time,  there were some pavilions for travelers in the remote area. The pavilions could be as simple as shade booth, or as complex as small restaurant. 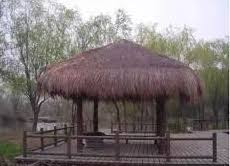 People could take break, or have food and drink. Person + Pavilion = Stop. We can say that the Stop is a rest area.

We can recall another character  Rest - 休 (Post 75).  Its shell bone script is

The left is a Person, the right is Wood (= Tree), a Person + Tree = Rest, when there was no pavilion, people just sit against a tree truck.

The small seal script of character Stop is

The left is Person, the right is Pavilion.

The clerical script of character Stop is

similar to the old scripts, just more straight lines.
The song typeface of character Stop is
停
Same as the clerical script.
Its Pinyin is Ting2.

I have to point out that there is another character of Stop - 止 （Post 93), its shell bone script is

a foot (left foot), which means that you have to use your feet to stop. Both are used right now, but 停 is more popular than 止.