which are the steamers for food cooking, made from bamboo or wood.

The left one has a steamer in the middle, and two hands on the bottom. The right one is similar to the left one on the bottom part, but there is a character Rice (Post 163), which means the rice is in the steamer. 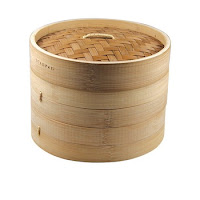 The big seal script for character Steam is

which is similar to the right of shell bone script above: the top is rice, the middle is the steamer, and the bottom are two hands.

The small seal script for character Steam is

which is changed a lot.
The top is Grass top, the Pictography Dictionary explains that it was mistakenly written this way. I guess there maybe a possibility that the ancient people sometimes used grass to cover the steamer top, or the grass means vegetables in the steamer. The middle is the steamer, and the two hands on sides, the bottom is Fire, which is a new addition but a good one because Fire is a must to steam.

The clerical script for character Steam is

Its Pinyin is Zheng1.