The shell bone script of character Boundary is

the middle is Person, who is surrounded by four dots, which experts believe are the indicative points to represent the cover armor on a solider who is protected by the boundary of the armor created. 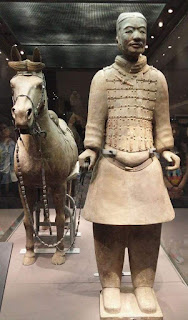 The small seal script of character Boundary is

The middle is the person, the four dots become two lines, more like the armor.

The top is the character of Person, the bottom is the armor, which is not protect the person anymore. The clerical script has lost the original pictography of the character.

The Pinyin for 介 is Jie4.