The shell bone script of character Auspicious is

The explanation of  Dictionary of Pictography (《象形字典》) is that the top is an elongated pointed tablet of jade held in the hands by ancient rulers on ceremonial occasions. 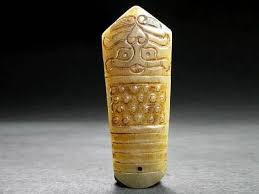 The bottom is Mouth.

The character means that King or The most powerful Person holds the tablet of jade to say something  in praying for good weather or lucky for public.

The top is like an ax, weapon for war. Some people believe that the bottom is a bag for the ax, people got a good auspicious sign for a battle, it is time to take the weapon to fight.

There is dispute on what the top is? tablet of jade or ax?

Similar to the old scripts.

The song typeface of the character is
吉
Same as the clerical script.
As you see above. the explanation of the character from the Dictionary of Pictography is that To pray for auspiciousness, but some disputes, the major is that the ax is out of the bag because auspicious sign showed up.

We will see more characters which have disputes on their meanings.