The shell bone script of character Call are

I mentioned in early posts that the scripts before small seal script (about 2200 years ago) are not unified, one character has multiple forms. The above are three forms of the character Call, there are much more, just unnecessary to put all and I couldn't find more at this moment.

The top of left are two person on the sides, and the middle is a knife for opening the jar and cutting meat. The bottom is a liquor jar. One person is host, another is guest. The host invited the guest to have a dinner together, they drink liquor which was very expensive in ancient time. So the original meaning of the character is to invite guest to have banquet together, i.e. Entertain.

The middle one, the top is same as the left one. there is a 口 in the middle for the liquor jar, and the bottom are two person and a big mat for them to sit on. 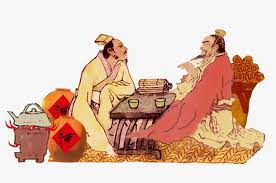 The bronze script of character Call is

Similar to shell bone script (the right one above): a knife over a mouth of liquor jar.
The small seal script of the character Call is

The meaning of the character has changed long time ago to Call, no matter with dinner or not.
The song typeface of character Call is
召
Same as clerical script.
Its Pinyin is Zhao1.
Posted by Lewei Shang at May 05, 2020