The bronze script of character Advance is

The left is half of character Walk (Post 96), and the right bottom is Foot (Post 93).
There are two popular explanations.
From 《象形字典》（Dictionary of Pictography, www.vividict. com) : A person chases a bird.
From 《汉典》（Dictionary of Chinese, zdic.net): The bird can't walk backwards, only forward.
I prefer to the latter explanation: the bird can only walk forward, so it means Advance.

which is very similar to the bronze script.

The top left is the Walk, and the bottom is the Foot, which is moved from the right bottom or bottom to left bottom. The right one is the small bird.

The left and bottom are Walk + Foot, people call it as 走之底 - Walking bottom, a popular character radical, meaning something related to walking.

進
Same as the clerical script.
The song typeface of simplified character is

The Bird disappeared, replaced by 井 - Well（Post 59). Why ? The Dictionary of Pictography explains that the 隹 is simplified to 井, which is not good because not only the difference between the two is very big, but the 井 has its only meaning.

A comment from 宝泉峡谷 who is the reader of Dictionary of Pictography gives different explanation: 井 has different meaning: 天井 which is similar to 四合院, both mean courtyard house. Southern Chinese call the courtyard as 天井 because it is surrounded by houses in 4 sides, a square or rectangle just like the 井. 天 means Sky （Post 132）. People can see the sky in the courtyard, so it is called Sky-Well = 天井。 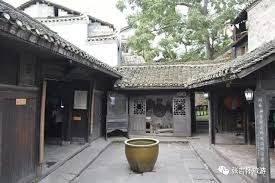 People walk into the 天井, the character means Walk Into, similar to Advance. I like the explanation.

In song typeface the character is 进.