The big seal script for character Shape is

The left is a pottery being processed. 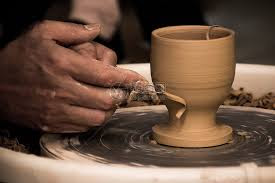 The top is the pottery, the bottom 土 is character Soil  (Post 223), which means that people make the soil to form a certain shape of pottery. Another explanation could be the base frame of pottery making, on which the soil is put on to be processed.

The right is the person's fingers which touch the spinning mud to form a certain shape pottery model. Another explanation is that the three left-falling strokes are the shadow of the pottery. I prefer the former one. 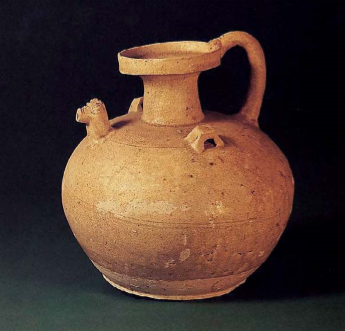 The above is my explanation.

According Dictionary of Pictography (象形字典), the left part is a Well (Post 59) -  colored clay mine. The right part is the colorful lines people drew on the pottery. I don't agree with the explanation because the left part in other characters means "pottery making process", and right part is light in all other characters, one example is 影 - shadow (Post 237). More important, adding color to pottery has nothing to do with its shape.

Because there is no ancient documents exist for the explanation of what the real meaning original, so many explanations can't be verified, or proved to be true. Different people may have different explanations. You can choose which one you feel the most rational to you.

The another big seal script for the character is

The small seal script for the character Shape is

Similar to the big seal script except the three parallel strokes are not touching the frame, which makes confusion of being considered as shadow.
The clerical script for the character Shape is

The left two 干s connected each other, which should be a mistake because it becomes another character 开 (Open). It should be due to simplify the writing.

The song typeface of the character is
形
Same as clerical script.
Its Pinyin is Xing1.
Posted by Lewei Shang at May 13, 2020