The shell bone script of character Son is

The bottom is the legs, and the top is a big head with two teeth, which is a baby with a few teeth. 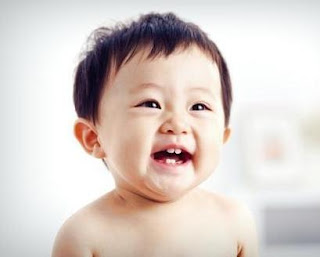 The big seal script of the character Son is

There are 4 teeth right now, because at that time, no unified characters, people could drew the characters as they wanted.

The top is same as the character Son. So we are sure that there are teeth. Why do I want to compare the two characters? Because some experts believed/believe that the top are not teeth, but is the fontanelle on the top of the baby's head, which is obviously wrong.

The small seal script of the character Son is

Similar to the big seal script

Still similar, the top is more close, which may be why some experts believe that the top is fontanelle because they didn't go back enough to check the earliest scripts.

In song typeface, we have traditional one
兒

The head is cut off to reduce the strokes, but lost the pictography completely.

Its Pinyin is Er2.

There is another similar character 子 （Post 21), which means Child and Son. The difference between the two is that 子 (Child) is more general term, any kids from new born to 14 or 18 depends on what the definition of child, the character 儿 in this post original is just for baby from new born to 2 or 3 years old. Right now, the two are exchangeable in most of times, the difference is very subtle. People put the two characters together 儿子 to express Son, which is a most popular term.
Posted by Lewei Shang at May 15, 2020