The shell bone script of character Epidemic is

which is a vertical bed (Post 151), bed facing right, in the character above bed facing left. A person (Post 37) in the middle is lying on bed (vertical drawing). The lower left is a hand holding a stick.
The explanations could be
1, the person who is infected is lying on bed, some one standing near the bed hold a stick to force the patient staying on bed in order to avoid infecting others
2, the person who stands near the bed is taking care of the patient.
3, the person who is treating the patient with Chinese Gua Sha (刮痧）therapy which using a smooth stick or stone to scape the body until the skin turns to reddish, which is still a popular therapy used in Chinese Traditional Medicine.
The 3rd one is my explanation. 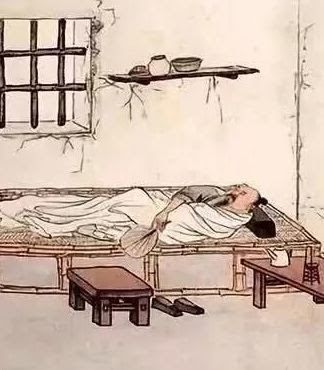 The bed is on the left right now, the lower right is the hand, the 厂 on the top could be headboard, the part on the hand could be the patient, just too small.  I just guessed.

similar to the big seal script on the left bed and lower right hand, the top horizontal line could be the headboard, under which is the patient.

The change is big. The 几 is the patient, and 又 is the hand.

The top and side part

is bed + headboard, which is a popular radical, called "Sickness Head", any character with this radical is related to sickness.

The song typeface of the character is
疫
Same as clerical script.
Its pinyin is Yi4.