The shell bone script of character Room is

The top is a cover, which means a house. The bottom is character To (至， see Post 298). As I discussed in Post 298, there is a dispute about what it is: An arrow touched a board, or a person sleeps on a bed after he came home?

If we assume that the inside is a person sleeping on bed in a house, which is Room. I guess that there was no difference between house and room in 3000+ years ago because it was too difficult for ancient  people to build a big house with many rooms. So a room is a place for people to sleep.

However, it is possible that ancient people traveled or moved with arrows because they had chanced to meet wild animals, or enemies. When they reached the destination, they put down their arrows with the arrow heads down on the ground or floor. If it has a roof, there should be a house or room for rest.

Both explanations are reasonable. 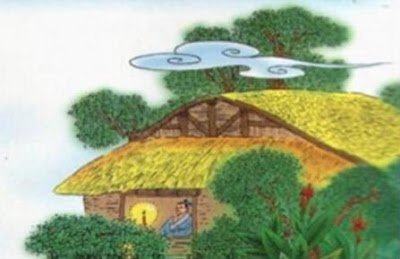 The bronze script of character Room is

is a big ax, which represent power.

The clerical script of character Room is

The song typeface of the character us
室
Its pinyin is Shi4.
Posted by Lewei Shang at June 27, 2020