The shell bone script of character Flourish is

There are two drawings.
The top one: the middle is a brick model, two hands on each side, a person is making brick with prepared mud. 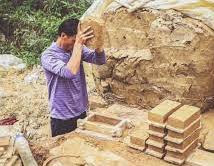 The worker smashed the mud into wooden mold. 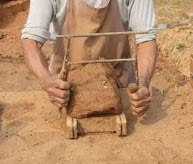 then cut the extra mud with a tight wire, which is the top of the character.
Carefully take the mold off, leave the fresh brick on the ground for days let it air dry, then take it to build a house, or move it into brick kiln to fire bricks for better bricks. 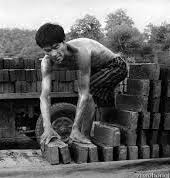 Which is the bottom of the character.
Many people are preparing to build up big buildings, or bridges or palace, etc. which means that people have enough food, and extra money to do large scale construction,  a Flourish time.
The bronze script of the character is

The top part is similar to that of small seal script, the bottom long dots are two simplified hands.
The song typeface for the traditional character is
興
Very similar to the clerical script.
The song typeface of simplified character is
兴
The top becomes 3 long dots, each represent one part of the top, reducing the strokes dramatically. At the same time, the pictography of character is destroyed.
Its Pinyin is Xing1.
The character could combine with 高 - High, to form a word 高兴 - Happy. The pronunciation of 高兴 is Gao1-Xing4.
So there are two pronunciations: Xing1, Xing4.
Posted by Lewei Shang at March 18, 2021