The shell bone script of character Hillock is

Which is like hillock. Let's recall the character Mountain

We see the difference the two characters: the Hillock is missing the middle high peak, which means that the hillock is shorter and smaller than mountain, also not as continuous as mountain.
The bronze script of the character is

Which is confusing.
《象形字典》- Dictionary of Pictography thanks that this script lost the pictography of the hillock without explanation why it happened. However, there is a comment from a reader which says that this script is not from shell bone script, and not a pictographic script but an ideogram. He thinks that the bottom horizontal line means soil, the top is character North -  北 (Post 264),

which are two back to back humpbacked people. The script means that the hillock shape is like the back of humpbacked people, and not continuous. It is not a drawing of hillock, but ideogrammatic.
The big seal script of the character is

Which is similar to bronze script.
The small seal script of the character is

Which is similar to bronze and big seal scripts except the two arms of people stretched much longer, which is the characteristic of small seal script.
The clerical script of the character is 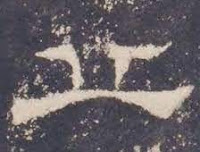 Which is similar to the structure of older scripts with typical clerical strokes.
However, the standard script of the character becomes 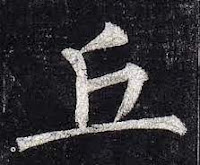 Which the top left-falling stroke is the opposite of the original stroke in the old scripts, and the middle horizontal stroke is the opposite of the original top right stroke. One comment of a reader of the Dictionary of Pictography says that the top left-falling stroke + the vertical stroke is a person humpbacked in opposite direction, the rest two strokes on the right is a person humpbacked opposite direction to the left. Actually, they are facing each other now, but they are not symmetrical, so difficult to see this way.
Even though the explanation is not very convincing, but I have not found any better explanation.
The song typeface of the character is
丘
which is similar to standard script not clerical script, which is very rare.
Its Pinyin is Qiu1.