The shell bone script of character Of is

Which is similar to bronze script, but the rise of the left curve line makes the difference of the heights of the two curves is too close to tell. Many people misunderstood that there is one smooth curve from top left continuously to right top, which is like Grass - Head Radical. 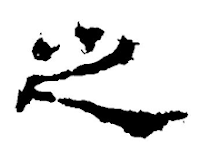 The left and middle strokes change to two dot, and the right stroke connects to the bottom stroke which becomes a right - falling stroke, a typical clerical stroke. The change is based on writing quicker but sacrificing the original pictography of the character
As time past, people changed it even more to the following