The bronze script of character Estimate is

The left is Water-Radical, the right is a bamboo measuring cylinder just like the following 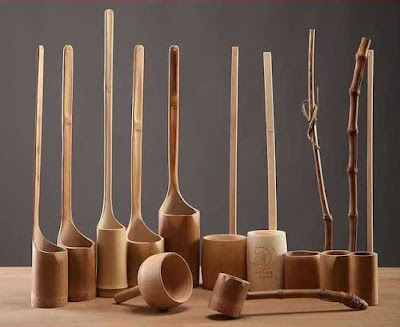 Each cylinder has a certain capacity, estimate not accurate. The seller inserts a cylinder into the Jar, submerged the cylinder into liquor, pulls it up, and pours the liquor into buyer's container. The original meaning of the character is Buy or Sell liquor.

Similar to the bronze script except the short line in the cylinder disappeared, which looks like character Ancient (Post 302)

The change has made great confusion on related characters later on because people think it as Ancient when it actually means Cylinder.
The small seal script of the character is

The left is Water, the right is character Ancient but actually a bamboo cylinder.
The clerical script of the character is

Similar to small seal except the left becomes Water-Radical, which means Water anyway.
The sont typeface of the character is
沽
Same as the clerical script.
Its Pinyin is Gu1.
沽 original buy or sell liquor or soy sauce or vinegar, but it expands to means general trade other items. It also means the estimate of the value of the trade item in pre-trade, especially the estimate of intangible assets. The trade may not be completed.