The bronze script of character Well Off is

The middle one is a bamboo sieve like the one below 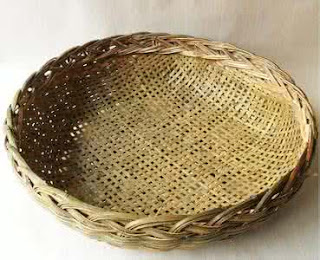 The dots are rice particles or other grain particle after shelling. The two vertical lines on each sides are the arms of the person who is shaking the sieve. I don't know the top part, may be the person's upper body. 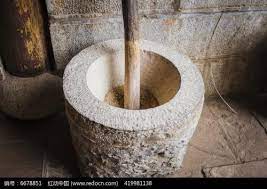 The middle is a wood mortar hitting the grain in the bowl, forcing shelling. After shelling, people pour the mixture of the rice or other grains with shell into the sieve to separate the grains from the shell. The grains are smaller, could drop through the holes, but the shell are kept in sieve. 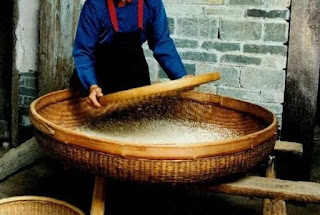 The character original meaning is to shell the grain, and leave the shell.

The middle bottom is character Rice, the two hands on its sides. It uses the characters to replace the drawing.
The clerical script of the character is

which has almost no similarity to the old scripts. What I could tell is the middle 尹 - alike means Hand holding something, and the bottom 水 - alike  may be modified 米 - Rice. I don't know how the 广 is from, and what is meaning.
The song typeface of the character is
康
Almost same as the clerical script.
The meaning of the character has changed to Abundance, Well off, Peaceful, and more long time ago. People seated another character 糠 for Its original meaning. Which is 米（Rice） + 康 for rice bran.

The pinyin for character 康 is Kang1.