The shell bone script of character Main is

The bottom of all three above is Wood (tree), the top is ancient Chinese mortise and tenon structure, similar to the joint structures below 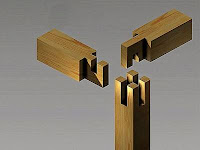 Ancient Chinese didn't use any nails to build house because they invented the mortise and tenon technique.

The middle top is the mortise and tenon joint, which is the most important structure for the house: The main pillar.

The top is similar to shell bone script, but the bottom is character Soil, not Wood. Some people believe that the top still a mortise and tenon joint, but others think that the top is a flame keeper, which was not easy to keep in the ancient time, very important thing to people.

Similar to big seal script, but the top middle is more like flame.

which changes too big to see the similarity to older scripts. The top flame become a skew dot, and the curve container for the flame becomes a horizontal line, completely destroyed the pictography of the character. Actually below the dot, it is character 王 - King. A dot over King = Main?
The song typeface of the character is
主

Same as to clerical script.

Its Pinyin is Zhu3.