The big seal script of character Eggs is

The dots are eggs, which are on the leaves. 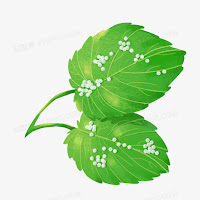 The dots become short horizontal lines, which is the characteristics of small seal script: all dots are represented by short lines.
The clerical script of the character is

The dots are back, but the leaf on the left is not like leaf very much, the vertical line becomes curve, which may be for better looking? I don't know.
The song typeface of the character is
卵
Very similar to clerical script.
Its Pinyin is Luan3.
卵 are actually small eggs, such as insect eggs, or ovum. There is another character for bigger eggs: 蛋, I may discuss in another post. Normally, if the egg is as big as broad bean, or bigger, it is called 蛋, otherwise it is called 卵. But sometimes, 卵 means all eggs, including big ones, specially in the proverbs. Because ancient Chinese didn't distinguish big eggs from small eggs, 蛋 appeared in standard script, which was very late, at least 1500 years later than shell bone script.