The shell bone script of Chinese Go is

The bottom is character Its or That - 其 (Post 504), original means basket. The top is character Wood (Post 10). The Go basket holds a Go piece inside. 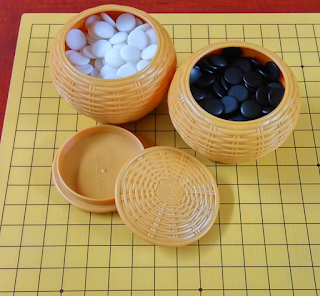 The big seal script of the character Go is

Similar to its shell bone script.
The small seal script of character Go is

The top is the basket, the bottom is character Wood (the Go piece), which is very odd. The reason why it is like this may be that this way is better to fit the small seal script, pull the two dots longer to cover the Wood, otherwise, the wood on top would make the character too long vertically.
The clerical script of character Go is

Right now, the Wood is on the left, the Basket is on the right, better for clerical script which is flat, long horizontally, and short vertically.
The Pinyin of character 棋 is Qi2.