The earliest script of character Silkworm is small seal script,

Are there earlier scripts exist? Yes,  but they are not found yet. The above character means Silkworm, which is my explanation, not from the dictionary. The Xinhua Chinese Dictionary explains that the character means little insect, which is close to my explanation. You will see why I think that it is silkworm, not just general insect in next post. 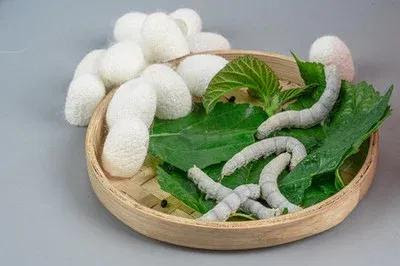 We can see that the top of shell bone, and big seal scripts are connected with the bottom, a drawing of a high tower. However in small seal script, there is 口 in the middle, no connection with top and bottom, lost the pictography.
Let us come back the character Silkworm, we could reasonably deduce that the top 口 was connected to the bottom 月 in shell bone, and big seal script, a drawing of silkworm. However the two parts is disconnected in small seal script above. The situation is similar to the evolution of character 高.
The song typeface of character Silkworm is