The shell bone script of character Connect is

The tail of fish trap is not very neat, but rough with many bamboo sticks 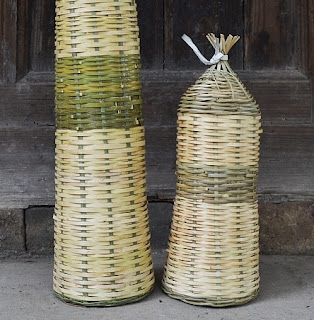 What I saw when I was a kid back to 1960s, and 1970s, the tail of the trap has much longer bamboo sticks, and the trap is much smaller. You could push two trap tails together without rope, they are connected tightly.

The bronze script of character Connect.

Similar to shell bone script.
The small script of the character is

Similar to older scripts, but the lines are smoother.
The song typeface of the character is