The shell bone script of character Drum is

This is a side view of a drum, the drum faces are toward to side, not on the top. 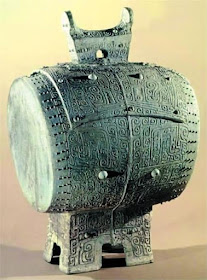 Similar to shell bone script.
The small seal script of the character is

Some similarity to old scripts.
The character as Drum discontinued to be used, probably sometime in Qin Dynasty or earlier because there is no clerical script of the character, which means that the character was not used in Han Dynasty (right after Qin Dynasty).
Another character Drum - 鼓 (Post 138) has replaced the one in this post. The simplified Chinese has removed it, only traditional Chinese still keeps it. But it exists in many compound characters, such as 鼓, the one replaced it.
Its Pinyin is Shu4.